Cascadia is converging in direct action protests against the Shell and Tesoro refineries near Anacortes. We expect hundreds to risk arrest and thousands there as supporters. Cascadia Freedom Caravan begins in Eugene and goes to Anacortes for May 13-15th. Please sign up to go here. There is a cost to ride the bus, sliding scale $20-60 and additional vehicles may feel free to caravan with us.

World leaders say we have to stay below 1.5°C of warming to avoid radical climate destabilization. No current policies keep us anywhere near this goal, and the fossil fuel industry wants to build vast new infrastructure, partly in response to the end of the crude export ban: they want to send both jobs and climate chaos overseas.

But it’s not too late. The Northwest can lead a just transition to 100% renewable energy safeguarding workers and our climate. We cannot delay, we must begin the conversation now.

The Shell and Tesoro refineries near Anacortes, WA are the largest unaddressed source of carbon pollution in the Northwest, refine 47% of all the gas and diesel used in the region, and are proposing new oil-train and export facilities; they are a prime example of the system that must change—within years, not decades.

Posted on November 17, 2015 by freedomcaravan

This past weekend, November 14-15,  the Cascadia Freedom Caravan took off to the Cascade Media Convergence in Portland. It was a fantastic weekend of radical media workshops challenging corporate media control and encouraging the grassroots media makers towards collaboration. We had folks from Eugene stay on the bus and we had a great crew from Olympia on board for the trip.

Looking forward to more to come in 2016!

The USSF San Jose was an amazing experience!

There were two buses with nearly 40 people who made the trek that began in Bellingham and picked up people in Seattle, Olympia, Portland and Eugene. This amazing crew of folks hurried south to San Jose for the USSF. There they participated in the workshops and PMAs. Thanks everyone for going!

Posted on February 13, 2015 by freedomcaravan

Wednesday, June 24th- Saturday, the 27th 2015, the US Social Forum will be happening at three locations around the country. This polycentric model of organizing means that we have less distance to travel then in 2010 in Detroit or in 2006 in Atlanta. We’re heading to San Jose! Get on the bus! Contact bruce@mediaisland.org for details!

Cascadia Freedom Caravan to the Tear Down The Walls National Gathering

Posted on October 13, 2013 by freedomcaravan

Cascadia is the idea that revolutionaries, alive today, will tear down the false political walls of state and national borderlines and unite a bio-region under a Blue Green Union Flag. That’s one of the many reasons why we are joining the pilgrimage of change agents and converging on Tucson, AZ, for the Tear Down the Walls National Gathering.

It’s a long road to peace through justice as many folks in Cascadia are well aware. We’re gonna get there someday but we’re definitely gonna get to Tucson by November 1st and we want those with the heart and the time to jump on board the bus for a journey you won’t soon forget. Finishing off November 3rd in Tucson is the All Souls Procession Weekend which at 20,000 people in the street, is their biggest community gathering mixing ancient tradition, culture and art in a visually stunning and enthralling procession and performance.

The Tear Down the Walls National Gathering is 3 days of workshops and trainings that is aimed at building cross movement alliances. It’s open for anyone to propose a workshop so we’re hoping folks in Cascadia will share their stories of organizing for liberty, equality and solidarity.

In 2010 the Cascadia Freedom Caravan was born to take folks to the US Social Forum in Detroit. Now it’s 2013 and it’s back for Tear Down the Walls. In 2014 we may be taking on travel to the NW People’s Movement Assemblies and in 2015 to another US Social Forum and beyond. It’s hard to predict the future but when we thread together the different paths of struggle along the blight of interstate highways by caravanning to share our stories, listen to the stories of our friends and weave together new forces for radical struggle.

Empires don’t fall, they’re torn down and it’s going to take a nonviolent revolutionary working class rainbow coalition of Latinos, Blacks, First Nations, Whites and all the wonderful rest led by women and youth to get it done. 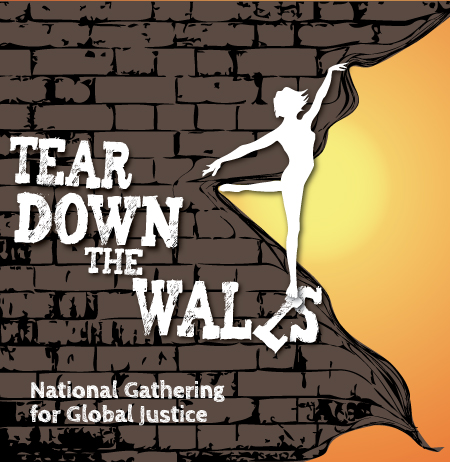 Posted on October 13, 2013 by freedomcaravan

3 years later we are back! We’re taking a new bus on another epic activist excursion and we want you to come! So contact us. 360-742-0864 bruce@afgj.org

Miles traveled: too many

Number of pages in the bus’s new Backstreet Gazette: 5

7 am—Waking up in the natural light with the birds makes getting up earlier easier…sometimes. What really does it is BOGA (it’s yoga, but not) brought to you by Amanda, every morning at a bus stop near you. Amidst hooting and hollaring and jumping, the caravan pieced together it’s tent piece and folded itself on the bus for an early morning start.

2 pm –Pit stop at the Painted Desert, where coal deposits struck by lighting burn in the earth, creating the orange color that paints stripes across the desert. The gift shop was full of Teddy Roosevelt parafanalia, and not much mention whatsoever about major battles for the land waged by Custer’s army.

1 am—Arrival in Fargo. Greetings by the Unitarian church welcome party, who waited up. Crash and burn.

America’s Buffalo are a Metaphor for the Times

They kill 1500 buffalo a year in Yellowstone. They come at them with helicopters, shoot them for stepping outside the bounds of the park, bounds that were placed around the last living pure breed of buffalo in the United States.

The Caravan stopped at the Buffalo Field Campaign campsite on our way through Montana, and were greeted by welcoming activists who sat down and talked to us about what they do, and two dancing, blonde haired twin toddlers, who proved that living out in Yellowstone created quite the rambunctious, free spirited characters. The camp is a series of four cabins, with a communal house for volunteers, and about 26 pairs of skis. The woodlogs are piled up outside the walls of the houses, and a placid lake is spread out in front of them, all within a few miles outside Yellowstone.

The Buffalo Field Campaign began as a solidarity movement with the buffalo and native tribes to protect the buffalo from being killed by policies that have been kept in place by anitquated laws. They spend most of their time in the field with the buffalo, sitting with them, and being present when they are assaulted. Their tactics have evolved from direct actions and media awareness of the issue, to policy changes and lawsuits pioneered by former volunteers of theirs who went on to become lawyers.

At the heart of the issue, however, their campaign is about more than the buffalos. The situation is a convergence point for multiple issues of discrimination and policy in the United States. It’s about racism. The buffalo is a symbol of strength and connection to the past for Native Americans –allowing it to flourish would represent a victory for them, and give their people strength. At the core of the issue is landrights and economics –major opposition to the buffalo come from cattle ranchers in the area, who make a kiling off of grazing their cattle on pulic lands (grazing cattle on private lands costs $11 to every $1 grazing on public lands costs). Public land grazing is one of the largest agricultural subsidies that happens in the United States; rather than let the buffalo roam it, the private cattle ranchers would rather feed their animals on it rather than pay to own their own land and have taxes and upkeep.

The buffalo represent the idea of America in many ways –the lone animal on a field, primal, strong, with the wisdom of the original people. Today, they are caught between economic greed, stagnant policies, and straight up discrimination, and the result is a wild and sacred beast is being lost. It’s a metaphor for the spirit of our country…and it’s up to us to do something about it.

While most people curled up in sleeping bags on the floor of the church, a few of us started talking with Dan, the guy who lives in the basement of the Unitarian Church in Missoula. Once he mentioned that town was only 10 minutes away, we filled up our waterbottles with a little bit of wine, and ventured off into the great unknown yet famous hippie town of Montana.

Dan was quite the unassuming, long-haired guide. He does ad placement for the Missoulan, one of two local Missoula papers, and lives with his boss. There are only seven people that run a paper with 27,000 distributions every day, and most of their content comes from other papers. They’re owned by a corporation that’s mostly interested in profit –and those comes from the ads he places, like Thursday’s Wal-Mart half-pager.

I only know two things about Montana, and they all come from my fathers stories of the sixties. The first is that Missoula has weird weather –being at the center of a pre-historic crater, something happens that traps the clouds above the city in its own convection cycle. According to Dan, this means the snow is toxic. The second thing is that somewhere in Missoula is a woman named Cassie, the girlfriend my father left to go onwards to Seattle and find his wife-to-be, my mother. Cassie married the house painter my dad brought home to dinner a few nights before he left. Small, strange town, Missoula is.

Now I know more things: Like Missoula was named after a saloon and titty bar named “Miss Ou—La-La.”  (according to my mother, this is not true –it’s a native word for “ambush.” I’m going with the titty bar…)  Most of the buildings in the town are original, and none of them are over a few stories tall, because Montana is the Big Sky State…and we wouldn’t want to interfere with the vista. The city paid a famous sculptor 2 million dollars to build an art installation encapsulating Missoula, and what he finally unveiled at the end of the main drag in town were four gigantic red X’s. The town was outraged, but the artist took the money and run. There’s a raging river that roars through the best place in town is the Butterfly Herb Cafe.   Missoulans idea of a good time is floating down the river that runs through the center of town in innertubes and a rack of beer, but people drown every year because they tube too early and get sucked into the faster running waters beneath the surface. Finally, there’s a great all night diner called Finnigans where you can get free refills on your hot chocolate.

Missoula by night was not all that bad. Rachael and I sat in the booth nodding off into our pancakes feeling like we were rocking on water, the aftermath of 10+ hours on a bus. We talked about Zapatistas, how pachyderms are elephants, how raccoons clean their food, and the University of Montana in general. We were back by 5 am, and up by 9 the next morning.